HOME ABOUT US SERVICES PHOTO GALLERY TESTIMONIALS CONTACT US

HOME ABOUT US SERVICES PHOTO GALLERY TESTIMONIALS CONTACT US 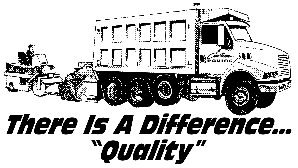 Contacted John Cooper, Owner of Custom Paving on May 25 for an inspection and estimate to extend my driveway area 18' X 22' and possibly second coat the existing driveway with a top coat of asphalt. He came to the house that afternoon, inspected the proposed work area and gave me an estimate to complete my request. He also stated he could do the projected within a week's time.He called on Tuesday, May 29 and told me he could do the project Wed., May 30. He and a crew of 4 other workers arrived at approximately 9 AM on Wed., started work on driveway expansion; dug expansion area out, filled with Lynnpac and compacted this area, which was completed in 2 hours. They then started final paving of total driveway area and completed this phase of the project at approximately 1 PM. The work area was completely cleaned up, all construction debris removed and paved area roped off. Attention to detail was outstanding. Paved area was tested for proper runoff using a garden hose - test was excellent - no puddle areas visible. All paved area was rolled and tamped properly with no seams visible. Crew was very courteous, friendly & very professional. All equipment used was in excellent working condition, fairly new and performed properly. I have worked with numerous paving crews, in my past work history, and Custom Paving is the best I have experienced. Their prices are very fair and I would recommend them to anyone.

ARE SAYING ABOUT US!!

On 7/5 I left a voice mail message for John Cooper, owner of Custom Paving, to set up an appointment for an estimate for a new driveway. At 8:00 that evening John called to set up an appointment for the following morning at 8:30. John arrived on time. We had a very good discussion regarding how the project would be completed. First, all existing material ( asphalt, dirt, rocks) would be removed. Next a 4 to 6 inch Lynn-Pac gravel would be spread and compacted using his 3-5 ton roller. A binder coat 2 inches thick uncompressed using 3/4 inch stone would then be laid. This would be followed by the finished coat of 1 3/4 thick asphalt uncompressed using 1/2 inch stone. The finished product would be about 3 inches thick compressed. The asphalt to be used would be totally virgin material versus using a combination of virgin & recycled material.

Because of the downward slope of the driveway towards the garage I was very concerned about how this would be addressed to prevent flooding in the garage. In addition, potential flooding at a low lying door in the house in the back also needed to be addressed. Thirdly, a drain in the backyard installed to carry away excess rain water would require proper sloping of the asphalt to ensure its effectiveness. John clearly advised me that all of my issues could be addressed.

Before agreeing to hire John I advised him that I would like to visit an actual job site to see him and his crew in action. John welcomed the idea to showcase his workmanship. He had me visit a work site that morning. I spent the day observing a driveway being installed that would be similar to mine. During the day he interrupted his work to clearly show and discuss what he was doing. The entire work process that he had discussed with me earlier in the day was complety followed. It was very obvious that he was very proud of his workmanship.

Once I received John's Certificate of Liability Insurance I hired him.

On 7/21 John and crew arrived early on a day that would go to 97 degrees. They worked hard and efficiently. The old asphalt, dirt and rocks were removed. In addition, he removed an old pile of rocks from my yard at no additional cost. The Lynn-Pac was laid and compacted and the binder coat was also laid. Based on a prior agreement with John the finish coat was going to be done at a later date because of some additional yard work that needed to be done. John and his crew really earned their money on this brutality hot day.

On 11/14 John and his crew returned and laid the finish coat. During this process he showed me how he was contouring the asphalt to ensure all of my concerns about flooding were addressed. All subsequent rainstorms confirmed what John told me -- I have not had any flooding and all the rainwater drains exactly as John said it would.

John & his crew which is primarily his 2 sons are very good to work with. They are very professional, friendly and take care to respect your property. Based on the quality of his work he has already picked up a couple of additional jobs in the neighborhood.

Did a wonderful job on a difficult driveway. We not only had drainage issues, but also our cement garage floor was crumbling due to the driveway deterioration. Custom Paving not only came in with the best price but they were the only ones to arrange for a mason to come and work on the garage floor as well.

Custom showed up early, went to work immediately. They did a complete and careful job and only had to ask me a question once during the time they were here. They completed the dig up, leveling, gravel and paving within two days. I'm sure they encounted more work than they had planned on but they made sure the job was well done. I was very happy with their work and their professionalism.

The mason that Custom Paving hired was excellent as well and although he encounted a bit of a bumb, had no trouble completing his portion of the job and it looks excellent. The above cost also reflects the mason's charges which were included in the final bill.

Day one- removed all old asphalt. Grated the driveway, leveled and put down stone base and first coat of asphalt.

Second day: Not sure of the details, but job was completed with lovely curbing and a slight hump at the end of the driveway to keep water flow going away from house. (We have an uphill driveway). John left us with instructions of do's and do nots for the longevity of the driveway. Just and FYI. He did require a check for the entire amount at the end of the job which was cashed the same day. Not sure if he takes CC's but would ask Custom if they take them.

Custom had all the vehicles and equipment to perfom the job. Work was completed in one day as promised John Cooper and the crew were very courteous and respectful to our property. They even worked through lunch. They did an excellent job!.